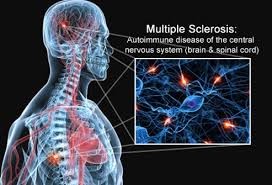 Case No. 12, Mr. P, aged 36 – this is a case that was published in Dr. Georgiou’s book entitled: “Curing the Incurable with Holistic Medicine: The Da Vinci Secret Revealed.”

Multiple sclerosis diagnosed in 1998 with three separate episodes – the last was in March 2007. This last crisis (myalgic symptoms of left hand) was a couple of months after removing 9 amalgams with no chelation protocol or protection taken during the amalgam removal. During attacks he receives Medrol (cortisone) I.V. as well as orally.

MRI of brain (6.11.04) showed multiple foci of high signal intensity on the FLAIR and T2W images in the subcortical and deep white matter of both cerebral hemispheres. There are also multiple similar lesions within the corpus collosum. Slight subtle focus within the right optic nerve just before the optic chiasma. The conclusion was demyelinating disease with further neurological assessment recommended.

A further MRI (12.4.07) showed on both sides, periventricular, in the corpus collosum, and mainly on the right side in the subcortical white matter, different sized (from 2mm to 8mm) hyperintense lesions. The conclusion was that these findings suggest inactive multiple sclerosis.

He had a history of allergic rhinitis, irritable bowel syndrome, acid reflux and headaches. He has been receiving the flu vaccine once yearly.

The IDEL Diagnostic Programme came up with a number of findings, such as:

VEGA testing and ART showed organ imbalances in the cerebrum, maxillary sinuses, teeth (right side), thyroid, myocardium, adrenals, spleen, pancreas, jejunum, colon and prostate. Prioritization testing showed the pancreas to be the primary organ blocking the autonomic nervous system. There were two scar foci detected – one on the left palm and the other on the lower hair line, due to hair transplant operation. There was also a tooth focus detected on the large intestine meridian. Panoramic X-ray showed one root canal filling, but no obvious signs of cysts or abscesses.

Iridology showed hypochlorhydria with an irritated stomach lining, thyroid, pancreas, with lacunas indicating an inherited weakness on the left kidney, heart and exocrine part of the pancreas. There were also subluxations at the cervical and lumbar levels (he has pains in both these areas with diagnosed osteophytes. There was also a general level of toxicity.

Darkfield microscopy study of live blood showed a non-congested picture with viable WBC’s, some fermentation and some free chondroits. There was nothing remarkable about his blood as he had already began to take supplements and change his diet before seeing him.

A urine pre-post provocation test using the natural chelator HMD™ as the provocation agent, showed high levels of circulating mercury which increased further upon provocation – 8.59 ug/g (<3 ug/l). Hair Tissue Mineral Analysis at a later stage showed a cocktail of heavy metals such as uranium, arsenic, mercury, cadmium and aluminium in circulating blood. There were also low levels of copper, manganese and cobalt.

Heart Rate Variability (HRV) testing showed increased sympathetic activity over parasympathetic with moderately reduced physiological functioning and adaptation reserves – his score was 10.5 whereas a perfect score would be 1.1.

He began a 15-day alkaline detoxification diet with fruit, vegetables and juices, followed by a gallbladder and liver flush and a parasite cleanse using black walnut tincture, wormwood and cloves. He also began taking the HMD™ Ultimate Detox protocol immediately, with the Organic Lavage and Chlorella, in order to begin chelating the heavy metals (see chapter 7).

He also began the DaVinci Candida Protocol on 14th October 2007 and completed this successfully by the following January (see chapter 5).

PAPIMI has helped his crises on a number of occasions.

During the year 1998, I woke up one morning and I was really shocked that I could not see anything from the right eye. I had a complete loss of vision of my right eye. I visited a doctor and I was diagnosed with optic neuritis at the age of 25. I had an MRI scan and a fluid sample of my cerebrospinal fluid using a lumbar puncture that was sent to England for testing. They could not diagnose 100% whether this was Multiple Sclerosis or not. Soon I began a treatment with corticosteroids for three consecutive days. I used in total 3000 mg corticosteroids these three days. Fortunately, I could see again, but the same situation occurred again 10 months later and I used corticosteroids again.

Until the year 2004, I had no other intense symptoms and my life went on normally. I experienced headaches, my energy levels were very low and my eating habits were very bad. By then, I was 31 and unfortunately this year I had a relapse with optic neuritis in my right eye again. I used for the third time the treatment with corticosteroids, in order to be able to see again. I decided to repeat the MRI scan this year and it was then, when I was diagnosed with Multiple Sclerosis with certainty since plaques clearly appeared in my brain tissue.

My neurologist suggested no other treatment by that time, since he said to me that my disease is incurable and I just had to live with it. From then and onwards, I was under so much stress, because I did not want to accept what my doctor was saying about my disease. I refused to accept that it is incurable and that at some point in the future I would have to take interferon, because of the relapses. I read that there are so many side-effects as far as interferon is concerned with minor improvement of the disease and I decided that I would never take it.

Then, despite my psyhological stress and disappointment from doctors, I was motivated to find out whether there was another way to deal with my problem. I had a feeling that there must be a way to deal with it. I started searching the internet for an alternative. I started looking into the field of Natural Medicine and during the year 2005, I started taking natural supplements on my own, ordering them from the Internet. I changed my eating habits, I improved my nutrition and I felt slightly better. I also had gastroesophageal reflux and it was markedly improved after changing my eating habits.

From December 2006 until February 2007, I removed 9 amalgam fillings, but I used a recommended protocol with natural medicine supplements before I removed them. In April 2007, I experienced the third relapse. My spinal cord was now affecting me. I had complete numbness on my left hand. There was damage on the 5th cervical spinal nerve and osteophytes started to grow. The relapse persisted for a few months and I used cortisone three times until August 2007 where I again took 72 mg of cortisone and my hand was improved leaving some sensory loss.

I then first visited the Da Vinci Holistic Health center in August 2007. I had an extensive series of tests called the IDEL Diagnostic program which is designed to identify and eliminate the causes of my health problems. After Dr Georgiou completed the testing procedure I was surprised to find plenty of problems that we had to deal with.

As I began the treatment protocol, beginning with a comprehensive detoxification programme, followed by the Candida protocol, I felt a huge difference. Using PAPIMI from the very first time I also felt a great deal of difference. My progression was interesting and I improved over time.

Because my job is very stressful, this is not very helpful. Since August 2007, my next relapse was June 2008 but not so severe. I did not use cortisone that time but I used PAPIMI instead to deal with the relapse. Whenever I feel my arm going numb and pain in my neck I now use the PAPIMI and I no longer need corticosteroids – this is an incredible finding as the side-effects of high-dose cortisone are many.

Following a few PAPIMI sessions the pain gradually goes away and I feel that I can live a normal life again without using any medication which would not really improve my disease and would cause a serious number of side-effects. My progression is promising since I have managed to stabilise my condition using basically three steps: change of eating habits following the recommendations of Dr Georgiou, taking food supplements, and using the PAPIMI whenever I feel I need it. I feel very energetic, less stressed and very positive because this works and I experience it every day. Thank you to the DaVinci Natural Health Center and Dr. Georgiou who have really helped to change my life and give me hope for a normal life, something that was not forthcoming from the medical profession.

Mr. P was really an excellent example of how high levels of toxicity, particularly from removal of mercury amalgams can cause havoc to the nervous system.

In addition, this has also been a test case for demonstrating the power of the Pulsing Electromagnetic Device called the PAPIMI in alleviating MS crises that would normally have required high-dose cortisone. In July 2008 he developed muscle weakness of the left arm, shoulder and neck due to high stress levels at work. After only 4-5 PAPIMI sessions all these symptoms had reduced to more or less zero in a period of less than 3 weeks. Under normal circumstances, crises like this would take much longer to overcome using high-dose cortisone with all its known side effects.

There are many causative factors involved in the pathogenesis of MS; the cocktail of heavy metals, including mercury which has a natural affinity for degenerating the neurofibrils of the nervous system – there is an excellent video made at the University of Calgary, Faculty of Medicine – Department of Physiology and Biophysics.[2]

It clearly shows how brain neurons growing in a petri dish in the laboratory can be destroyed so quickly when a very small amount of mercury is introduced – the brain cells literally disappear in front of your eyes!

Digestive issues are also another major issue in the pathogenesis of any disease as the 40 or so vital nutrients required daily by the body are not available, so the body enters a downward spiral of deficiencies and biochemical imbalances that will over time lead to chronic, degenerative disease. Addressing the digestive issues is a crucial part of any restorative programme. The Klenner protocol using high-dose B-complex vitamins was also another important step in helping the myelin sheath to restore itself.

Mr. P is now generally well and stable even though he works in a high-stress job with lots of daily responsibilities. There have been no further crises for the last year, even though he maintains his health with an optimal diet and maintenance sessions on the PAPIMI every month.

[1] Klenner, FR. Response of Peripheral and Central Nerve Pathology to Mega-Doses of the Vitamin B-Complex and Other Metabolites. Journal of Applied Nutrition, 1973.