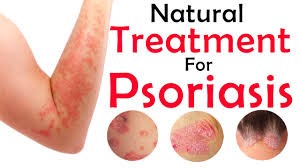 Case No. 11, Mrs. P, aged 42 – this is a case that was published in Dr. Georgiou’s book entitled “Curing the Incurable with Holistic Medicine: The Da Vinci Secret Revealed.”

Mrs. P had been to 3 different dermatologists for her chronic psoriasis and all had confirmed the diagnosis of psoriasis. They had all said that this was incurable and that only cortisone creams would keep it under control.

I have seen many cases of psoriasis in clinical practice but I can honestly say that this case was one of the worst that I have ever seen – there was heavy blotches of psoriasis on the face, forehead, back, front, legs and arms – literally the whole body was covered with a lot of pruritis.

VEGA food intolerance testing showed that she was intolerant to wheat, milk and lactose, chicken, pork, potatoes, tomatoes, aubergines and eppers, caffeine and the cruciferous vegetables. A blood analysis test of food intolerances had confirmed many of these, but also identified other foods that she never ate such as cola nuts, cashew nuts, soya beans, pineapple, as well as identifying yeast.

VEGA and ART testing confirmed the presence of pathogenic, mycelial systemic Candidiasis – it is highly probable that she had been infested with this candida for many years as she had recurrent vaginal discharge and thrush over many years. She had also taken a number of antibiotics and cortisone over the years.

Iris analysis showed a very murky iris which is an indication of chronic toxicity over the years – the fact that she was also dehydrated only helped to exacerbate this and maintained her constipation which further added to the toxicity. All the detoxification organs were irritated and toxic – kidneys, liver, gut, lymphatics – there were irritation marks on the thyroid and lungs. There were also spinal subluxations identified at the cervical and lumbar levels, with corresponding pain in these areas.

Hair Tissue Mineral Analysis had shown that she had a poor mineral profile with low levels of potassium, copper, zinc, manganese, selenium, cobalt and molybdenum. There were also traces of circulating uranium-238, arsenic, mercury and cadmium.

She was also extremely dehydrated, only drinking 2-3 glasses per day in temperatures of 40 degrees centrigrade with lots of sweating in her daily work. 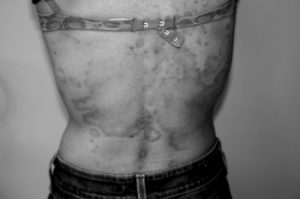 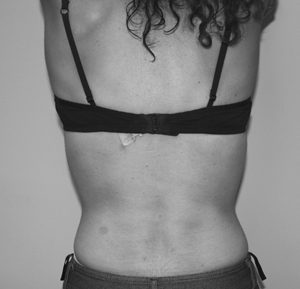 Psoriasis – before treatment and after treatment

The first thing that was implemented with Mrs. P was a 15-day alkaline detoxification protocol to help balance her internal milieu and flush out a number of toxins. She also also completed a parasite cleanse for 14 days, as part of her job was to handle meat from different animals and the likelihood of having parasites were high – oxyuren had appeared on resonance testing.

By the time she had completed this cleanse she reported a 50% improvement of her psoriasis on all parts of her body, but particularly on her face. She began the Davinci Candida Protocol immediately after the detoxification (see chapter 5).

She was also given a multivitamin formula, omega 3,6 and 9 fatty acids, antioxidants, multimineral formula, zinc and a herbal formula to help the drainage of toxins through the detoxification organs.

By the time she had completed her Candida protocol over a 3-month period, her psoriasis had cleared completely from her face and body, with only very small spots visible. Her vaginal discharge had also disappeared, even though this was a daily occurrence.

I found the Davinci Centre through a sister at the hospital that I knew – she saw how desperate I was one day while visiting the dermatologist and understood the severity of my problem. I told her that I was very desperate and near suicidal with the spreading psoriasis that was disrupting my life on all levels as I no longer wanted to go out and socialize any more.

I had suffered with the psoriasis now for over 4 years and it seemed to be spreading all over my body, but the fact that it was all over my face was the worst as I could not cover this in any way.

I took the sisters advice and went to see Dr. Georgiou – he carefully took my history and immediately asked how much water I was drinking. I told him about 2-3 glasses per day. His eyes lit up and said: “you are losing 9-10 glasses of water per day and drinking two. You do not need to be a mathematician to realize that your body is in desperate need of water. Your major detoxification organs are having a tough time detoxifying and all those toxins are now showing on your skin.”

I thought that he made a lot of sense and wondered why the other doctors had not told me something similar – no other doctor had asked me how much water I was drinking.

After confirming this through the iridology he did, as well as finding various foods that I was allergic to, as well as candida, he said that we had a lot of work to do over the next three months or so.

He suggested that I begin cleaning my body immediately by eating “like a bunny rabbit” was his exact words. Even though I liked my sweets and biscuits, I was so intrigued that I followed his instructions to a tee. It was not long before I noticed the psoriasis drying on my skin and flaking off – every day there was an improvement. I was encouraged to continue with the candida treatment.

By the time I had completed the candida treatment which took 3 months, I found that my skin had cleared completely, there was literally not a spot to be found, accept a couple of very small ones behind my ears which flare up a little when I am stressed.

I am ever so grateful to this form of healing that uses gentle remedies and really works as I am a living testimonial to this. I have already began to attract attention from people that see me now completely cured and wonder how I managed it, given that I used to tell them that I was a victim of the disease and that it was incurable.

All symptoms have underlying causes, including psoriasis. This was probably one of the worst psoriasis cases that I have seen – when investigated, it was found that she had a severe underlying systemic Candidiasis, multiple mineral deficiencies, heavy metal toxicity, food intolerances causing inflammation in the body, constipation related to dehydration and poor eating habits that made her even more toxic, overloading and congesting the liver and causing the skin to actively take over the detoxification function.

Once all these causative factors were cleared up her skin cleared and the psoriasis went into remission. She has maintained her good health for over a year now without any further psoriasis or other health issues.