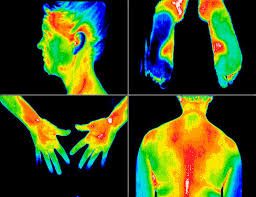 The body produces heat which must be lost to the environment. The interface between this heat production and the environment is the skin so the body depends on heat transfer from the skin for thermoregulation.

The skin is a dynamic organ which under the control of the sympathetics is constantly adjusting to balance internal and external temperature conditions.Thermal imaging is the most efficient technique for the study of skin temperature distribution. By measuring bi-lateral anatomical sites and identifying significant changes thermal imaging is an objective non-invasive diagnostic modality.Thermal Imaging is particularly useful for the monitoring of treatment, whether surgical, physical or pharmacologic.

Inflammation is the precursor to many cancers and other degenerative diseases such as arthritis, heart disease, stroke, diabetes and high blood pressure. Early detection of inflammation using Thermography may help prevent many negative health conditions from developing.

X-rays, CT-scans, Ultrasound and MRI scans are all tests of ‘anatomy’ that are assessing the structure of the body – thermography on the other hand is unique in that it measures physiological changes and functioning of the body, not only structural issues.

Thermography also plays an important role in heart disease prevention as it can assess heart functioning and detect inflammation in the carotid arteries which may be a precursor to stroke and blood clots. Early detection of heart problems can save your life!

Other Uses of Thermography

Thermography can also be used in many other areas of health:

Other Health Issues – these would include bursitis, herniated discs, ligament and muscle tear, lupus, nerve problems, whiplash, cancer and many others.

Other Interesting Points About Thermography

Joseph Bronzino mentions in his book entitled “Medical Devices and Systems” the following points about Thermography:

When used as part of a multimodal approach (clinical examination + mammography + thermography) 95% of early stage cancers will be detected.

Thermography – is a non-invasive, diagnostic imaging procedure involving the detection and recording of cutaneous thermal patterns using instruments which can provide visual and quantitative documentation of these temperature measurements. Because thermography detects pathophysiologic changes in cutaneous temperature, it may be used as an integral part of the physical examination or, alternatively, as an adjunct to that examination.

The interpretation of these temperatures and thermal patterns can be important in the development of a diagnostic impression. 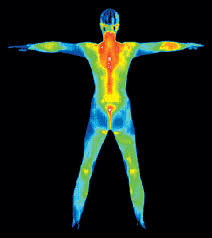 Thermography is appropriate and germane to any healthcare practice whenever the treating professional feels a physiological imaging test is needed for diagnosis or case management. It provides information about acute as well as chronic conditions and can be useful in distinguishing aggravated from residual tissue injury.

Thermography is an imaging technology which provides information on the normal and abnormal functioning of the sensory and sympathetic nervous systems, vascular dysfunction, myofascial trauma and local inflammatory processes. It may contribute to a diagnosis and case management by aiding in the determination of the site and degree of lesion, the type of functional disorder and the prognosis for treatment outcomes, as well as assisting in the determination of the most effective course of treatment through continual case evaluation.

Thermography is a safe and effective means for evaluation of vasomotor instability due to irritation or injury of spinal roots, nerves or sympathetic fibers. It is to be considered an adjunctive test and not solely diagnostic except in cases of reflex sympathetic dystrophy. While one cannot extend the technique of thermography to indicate the central phenomena of perception of pain, it is useful in detecting associated ‘vasomotor instability and complex pain states associated with arthritis, soft tissue injuries, low back disease or reflex sympathetic dystrophy and does provide objective data to identify dysfunction in roots that are irritated in the spine, peripheral nerves that are irritated and damage to the sympathetic nervous system.

The diagnosis of neurological and musculoskeletal abnormalities by thermography is based on associated thermal asymmetry between normal and abnormal sites, a change in normal temperature gradients in limbs or between medial and lateral digits, or a disturbance of the normal physiological temperature distribution pattern. 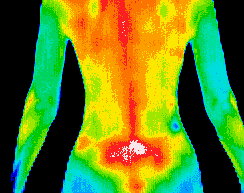 When conditions of the vascular arterial, venous, and lymph, and the skin conditions are normal, then the major control and regulation of the dermal circulation is neurovascular. The neurovascular control of the skin is the sympathetic nervous system. The components of this sympathetic response, however, are both adrenogenic and cholinergic.

The adrenogenic portion produces vasoconstriction and the cholinergic portion produces vasodilation in the cutaneous microcirculation. Regulation of this cutaneous circulation is from the embryonic anterior neural ridge, which produces the sympathetic paravertebral ganglion. The postganglionic fibres connect with each and every organ of the body as well as to the skin. When the 31 pairs of peripheral nerves are established, their content is anywhere from 8 to 35 percent unmyelinated fibres, which are of the sympathetic afferent or efferent function.

Blood flow allows core temperature to come to the surface or not, and will change the temperature of the skin territorially. Each area of the body has a particular cutaneous-cordal connection by the sympathetic nervous system. The alteration of the thermal content of a territory occurs based upon alterations of this nervous control. Only the dermal blood flow changes explain the heat seen on the surface of the body.

The heat of a muscle, joint, or a bone is not conducted to the dermal tissues and cannot influence the dermal temperature recorded by thermography. Conduction of heat from the deeper portions of the body to the surface does not occur or create changes in the surface temperature. However, there are neurochemical processes in the dermis which can block the normal sympathetic control of blood flow in the skin, such as histamines, prostaglandins, and myovascular receptor inhibitors of mast cells. These, however, can be easily differentiated from neural control by clinical correlation.

Areas of the surface of the body are recorded as symmetrical. The frontal areas, the thumbs, the great toes, the knees, the buttocks, the posterior shoulders should be contra laterally symmetrical and isothermic. If there is a difference, it is described as a delta T and means simply the difference in temperature. In order to interpret thermographic patterns, one must know the normal pattern. The normal pattern of the skin surface is symmetrical, and it is thought that the 95 percentile range in the normal subject deviates less than 0.3° C. Uematsu and others have established the normal patterns of the human surface temperature.

Relationships of various areas one to another must be learned. The hands are usually colder than the shoulders. The buttocks and the feet are the coldest in the lower body, followed by the anterior knees. The thenar side of a given hand is usually warmer than the hypothenar, and the fingers are cooler than the palm.

It has been shown that the surface temperature of the human body is symmetrical. It is a reflection of blood flow in the dermal microcirculation, and the control of this microcirculation is autonomic and specifically, sympathetic. The major basis of clinical thermography is the correlation of temperature recordings with various conditions from disease and injury as it relates to autonomic function.

Digital Infrared Thermal Imaging (DITI) is practiced at the Da Vinci Holistic Health Centre in Larnaca. Images of the appropriate areas of the body are taken and sent to a team of specialist M.D. Thermologists in the USA. The images are analyzed and a full report is written and returned to the patient.

The Da Vinci Holistic Health Centre has been approved by the American College of Clinical Thermlogy (ACCT).

Dr. Georgiou is a member of the American College of Clinical Thermology and a Certified Thermographer, a naturopath and has a Doctor of Science in Alternative Medicine.

What is Breast Thermography? 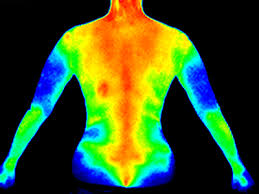