Mercury: One of the most dangerous toxic metals

Jan 30 Comments Off on Mercury: One of the most dangerous toxic metals

Mercury: One of the most dangerous toxic metals

Mercury is one of the most dangerous toxic metals, even though it occurs naturally in the environment and exists in a large number of forms. Like lead or cadmium, mercury is a constituent element of the earth, a heavy metal. In pure form, it is known alternatively as “elemental” or “metallic” mercury (also expressed as Hg(0) or Hg0). Mercury is rarely found in nature as the pure, liquid metal, but rather within compounds and inorganic salts. Mercury can be bound to other compounds as monovalent or divalent mercury (also expressed as Hg(I) and Hg(II) or Hg2+, respectively). Many inorganic and organic compounds of mercury can be formed from Hg(II).

Mercury is mined as mercuric sulphide (cinnabar ore). Through history, deposits of cinnabar have been the source ores for commercial mining of metallic mercury. The metallic form is refined from mercuric sulphide ore by heating the ore to temperatures above 540 º C. This vaporises the mercury in the ore, and the vapours are then captured and cooled to form the liquid metal mercury.

Inorganic mercuric compounds include mercuric sulphide (HgS), mercuric oxide (HgO) and mercuric chloride (HgCl2). These mercury compounds are also called mercury salts. Most inorganic mercury compounds are white powders or crystals, except for mercuric sulphide, which is red and turns black after exposure to light. Some mercury salts (such as HgCl2) are sufficiently volatile to exist as an atmospheric gas. However, the water solubility and chemical reactivity of these inorganic (or divalent) mercury gases lead to much more rapid deposition from the atmosphere than for elemental mercury. This results in significantly shorter atmospheric lifetimes for these divalent mercury gases than for the elemental mercury gas.

Elemental mercury in the atmosphere can undergo transformation into inorganic mercury forms, providing a significant pathway for deposition of emitted elemental mercury.

The most common organic mercury compound that micro-organisms and natural processes generate from other forms is methylmercury. Methylmercury is of particular concern because it can build up (bioaccumulate and biomagnify) in many edible freshwater and saltwater fish and marine mammals to levels that are many thousands of times greater than levels in the surrounding water.

Methylmercury can be formed in the environment by microbial metabolism (biotic processes), such as by certain bacteria, and by chemical processes that do not involve living organisms (abiotic processes). Although, it is generally believed that its formation in nature is predominantly due to biotic processes. Significant direct anthropogenic (or human generated) sources of methylmercury are currently not known, although historic sources have existed. Indirectly, however, anthropogenic releases contribute to the methylmercury levels found in nature because of the transformation of other forms. Examples of direct release of organic mercury compounds are the Minamata methylmercury-poisoning event that occurred in the 1950’s where organic mercury by-products of industrial-scale acetaldehyde production were discharged in the local bay, and the Iraqi poisoning events where wheat treated with a seed dressing containing organic mercury compounds were used for bread. Also, new research has shown that methylmercury can be released directly from municipal waste landfills (Lindberg et al., 2001) and sewage treatment
plants (Sommar et al., 1999), but the general significance of this source is still uncertain.

Being an element, mercury cannot be broken down or degraded into harmless substances. Mercury may change between different states and species in its cycle, but its simplest form is elemental mercury, which itself is harmful to humans and the environment. Once mercury has been liberated from either ores or from fossil fuel and mineral deposits hidden in the earth’s crust and released into the biosphere, it can be highly mobile, cycling between the earth’s surface and the atmosphere. The earth’s surface soils, water bodies and bottom sediments are thought to be the primary biospheric sinks for mercury. 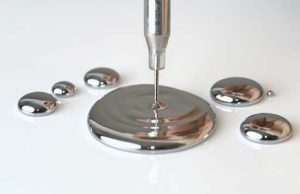 Mercury is one of the most dangerous toxic metals Heavy metal toxicity is considered as a major threat to our bodies due to its association with several health risks that can occur. The effect of heavy metals in human organism is harmful and severely affects its proper function. Because of toxic metals, our natural detoxification system finds it difficult to work efficiently.

Considered as one of the top ten toxic chemicals by public health, mercury is a naturally occurring element found in the earth’s crust, air, soil and water. This toxic metal is found in daily life objects such as fluorescent light bulbs and glass thermometers and we even put it in our organisms through seafood and dental amalgams.

Right where you think that there are already many ways for mercury to end up poisoning us, pharmaceutical companies come to give more! Multiple flu-vaccines including two children vaccines contain thimerosal, a compound that contains mercury. The use of thimerosal in vaccines is due to its ability to prevent the growth of bacteria in them. This compound is categorised as ethylmercury, which in contrast with methylmercury is cleared from the body faster and is therefore considered as less harmful type of mercury. The fact is that even if it’s less harmful than other kinds of mercury, thimerosal is still a toxic substance that comes from a heavy metal.

What are the symptoms resulting from exposure to elemental mercury?

The symptoms that can result from mercury exposure are:

Mercury may have toxic effects on the digestive and immune systems and the nervous system. Also, on kidneys, lungs, skin and eyes.

How can we detoxify from mercury?

First of all you need to reduce the exposure to this element. This implies all the things stated above such as fluorescent light bulbs, glass thermometers and flu-vaccines that contain thimerosal. Include less seafood like tuna in your diet. If you have silver dental fillings, you have to take the advice of a professional. 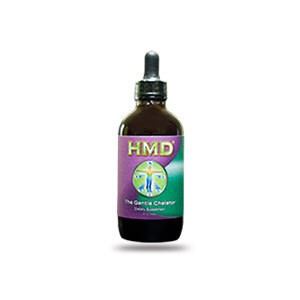 This unique formula is the result of 3 years of scientific research and is a 100% natural heavy metal product.

HMD™ is made from 100% natural ingredients and is suitable for vegetarians and vegans. It is free from allergens, artificial colouring, flavors, salt or preservatives. HMD™ contains Cilantro (Coriandrum satvium), a homaccord of Chlorella pyrenoidosa and Chlorella Growth Factor (CGF).

It has been on the market for over 10 years.  One bottle contains a one-month supply at the full adult dose of 45 drops, 3 times a day. We usually recommend taking for 3 months, with the addition of our LAVAGE and CHLORELLA to ensure optimum results.

We advise following this program for a minimum of 90 days. Please note that people with very high levels of toxicity may need to detox a few months longer. Each bottle is sufficient for about a month.

While following our Ultimate Detox Diet we recommend adults drink at least 8-10 large glasses of pure water or herbal tea a day. Children should also be encouraged to drink as much water as they can manage, relative to the adult dose.

If you want to further enhance your detox and cleanse your liver we also recommend you limit your alcohol intake.

If you want to further enhance your detox and cleanse your liver we also recommend you follow the ULTIMATE DETOX DIET and our ULTIMATE DETOX PROGRAM.